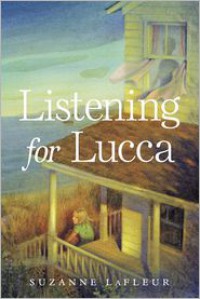 I have read quite a few books lately where characters travel to different times, through special gifts of their own, or else through magical portals of one sort or another. I am drawn to these kinds of stories, I think, because despite their futuristic sounding themes, they look back to a slower paced time, trying to recapture something that’s been lost.

This story is all about loss. There are lost and abandoned objects that 13 year-old Siena, the main character, collects. There is the lost voice of her 3 year-old brother, Lucca, who does not speak. And there is the loss of the family who once lived in this beautiful old Maine house that Siena’s family has recently moved into. For some reason, I think the tangible stories of loss prepare us for the more difficult kinds of loss, the kind that cannot always be easily explained or gotten over.

There are some adult conversations in this book that make me feel it is more appropriate for YA than middle grade, though the characters, aside from one or two mentions like that, feel much too immature. Siena, is a 13 year-old who seems to ask herself an awful lot of inane questions — almost every time someone nods in her direction she examines it, “Does that mean he likes me? Does she want to be my friend?” This would be fine for a young, socially awkward girl from the country, but Siena is supposed to have grown up in New York City, where you would expect her social cues to be a little more on target. I think the author is trying to show her insecurity, shyness, etc., but it gets a little overbearing when it is repeated so often. More importantly, the idea that a 13 year-old would sincerely believe that her saying “shut up” to her brother would encourage him to be mute was just unbelievable.

The story revolves around Siena’s visions and dreams; that (incredibly) led her family to this house. Granted, I am not a middle grader, but I became skeptical of this early on, no matter how much I wanted to believe. More than once I found myself saying, yes, we got it, only you have this terrible gift. People in Brooklyn thought you were weird, noted. Of course, most 13 year-olds would not tell people at school “I see dead people”, or anything to that effect. Whenever Siena spoke of her mother, it was dismissive in this regard — her mother had chosen the house because it seemed to be what Siena described from her dreams, not because of any visions or abilities her mother had to see it. (Because only Siena had this cursed gift. Oh yeah, and maybe Lucca, but he can’t talk, so no, just me, Siena, cursed for being weird.) Honestly, I think this would have been a better story without any of the ghosts, magic, whatever. The characters were really more compelling without it. The whole idea of her visions raised too many questions; it felt more like a device than a plotline.

The idea of a family moving from Brooklyn to find peace in a house by the sea in Maine — isn’t that enough for a story? Pieces of the past found in odd places can have a story without a ghost telling it. And sometimes, we can meet all kinds of people who can help us put that story together. So yes, I did like the story, but I also could have loved it a whole lot more.