Some of Tim's Stories 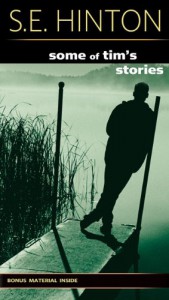 Ok, I will admit right here, that I will read anything S.E. Hinton writes. So I’m biased, and now you understand. Having said that, this wasn’t one of her best, but it is still a worthwhile read. I did not realize how short it was (yes, I could have found that out before I started, I just wasn’t paying attention), so it seemed like it ended just as I was really getting into it. I liked the characters – two cousins raised as brothers, who are worlds apart in their personality, despite a strong emotional connection. I liked the periphery characters as well, though the way the narrator sometimes referred to Aunt Julie/Aunt Jelly was a little confusing. It took me a couple of minutes to realize they were the same person. If you are into strict chronology, this is not the book for you. But the mixing of different time periods does provide some “aha” moments, when different people come and go in the narrator’s life.

As I said, the book was short – I was at 44% on my kindle when it ended, because the

second half of the book is an interview with the author. This was actually very interesting, so it wasn’t a disappointment. Being a fan, I knew surprisingly little about her life. Her stories about writing and making movies out of her books, were easily as interesting as Tim’s.