A Summer of Sundays 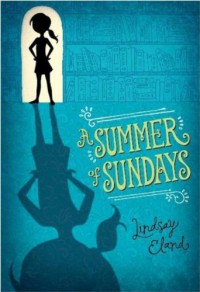 This book was well written, and appealed to my love for an old-fashioned story. There were several things I did not love about this book, but not enough to make me put it down. I did wonder, as I read it, if my actual middle grade daughters would like or dislike the same things I did, so I will have to follow up after they read it.

For some reason, as I read, I had in my mind the old man and the young boy from the movie “Up”. This is not a bad thing — I loved that movie — but it somehow took the story away from the main character, a girl named Sunday Fowler. Since we’re mentioning names, I will admit that this is another book that made me wonder why an author would give the character such an odd name. I will admit that Sunday is not as bad as some I’ve seen recently; though of course, if it were my daughter, it would have at least been “Sundae”. What I don’t understand is that she is one of six children, and all of the others have pretty run of the mill names. Considering that the main issue of the book is that Sunday feels like she gets lost in the crowd of her family, you might take exception with the author’s choice.

I don’t really like to talk specifically about the plot of a book, because you can read that anywhere, and probably written more intelligently. What I think, is that the plot hung on a wisp of a premise. It was annoying, after a while, to hear Sunday whine to her new friend about how she is going to “make her mark”. She is so single-minded in her pursuit; she barely notices the positive events her influence has inspired. But the idea that she, a lover of books, would choose to make her mark in the way she plans is almost sacrilegious. Even though I knew how it would unfold, I felt it took too long for her to understand her plan was flawed. In fact, this was true for many parts of the book: she is presented as an above average student, yet she takes an incredibly long time to figure out what seems obvious. Again, I am not 11, so I will let you know more on that later.

I did see on another review that someone compared it to the Penderwicks. Those books are kind of a joke in my house, because I never got through one of them with my girls. Not for lack of trying. My kids mock me for my relentless attempts. Well written, but maybe not compelling enough? Sadly, I would say the same about this