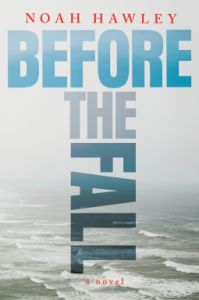 This book was positioned as a thriller, but it didn’t really fit into that genre for me. While it seemed a bit “ripped from the headlines”, it was written with an intelligence that belied the occasional celebrity tell-all feel. To me, it was more intriguing than gripping, but while the conclusion seemed inevitable and unsurprising, this did not really detract from the story. Hawley is terrific at crafting his wealthy characters, but I found the ordinary, flawed ones more interesting. I especially appreciated that the artist living on Martha’s Vineyard is poor and relatively unknown despite living in what would normally be considered a high-end vacation spot. Hawley is deft at contrasting the flashy tabloid news with the human side of the story, and I found just as many parts deeply moving as completely despicable.

One reviewer ranted on and on about how bad this cover is – but as a graphic designer (who frequently judges a book by its cover), I am weighing in on this one. I was attracted to the type that was at once bold and ethereal; accurately, I think, evoking the tragedy and uncertainty to come.