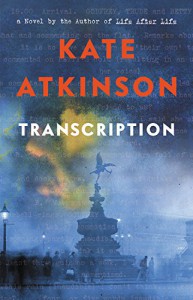 Just when I thought I’d read enough World War II books (are they a genre? Should they be?), along comes another from Kate Atkinson, who has brought me through the war twice already, in Life After Life, and A God in Ruins. Ironically, I have these reviews back-to-back, but I actually read Transcription first, and am working my way through a backlog of reviews. In case you can’t tell, I’m a fan of Atkinson’s writing, and think that it can elevate even a mediocre storyline. There are compelling themes here—the women’s roles described offered yet another new perspective on the war—but the characters did not seem as developed, and the story as well-plotted as her other writing. You can see that even a partial miss for Atkinson still earns a respectable rating, because I liked it enough to finished it in a couple of days, and, even better, I learned something in the process.