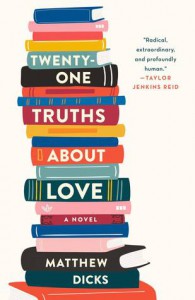 I think there might be mixed feelings about the format of this book—told mostly in lists—but I thought it was engaging and made for a fast-paced read.

(yes, you know I’m totally going there with the lists)

This book has so much going for it:

But, as we all know, owning a bookstore is not a get-rich quick scheme. So, when the business starts to fail (or actually, never really gets off the ground),

does Daniel Mayrock decide to:

No, he does not. Instead, he comes up with an idea to get out of debt that is:

What happened to smart Daniel?

But wait, you gave it 4 stars!